Focus on Nature (FON) is a biennial juried exhibit of nature and science illustration. The exhibit is organized and hosted by the New York State Museum in Albany; this year the artwork is on display from April 28 to December 31.

The piece I entered in FON XII  is a gouache painting of a fossil brachiopod that I did on my own time, not as a commission. Fossil invertebrates are my favorite subjects to illustrate because their forms are so varied and interesting, and reconstructing how they would have looked in life can be a challenge. Little may be known about them and what is known may have been published decades ago. In this case I had some excellent specimens and found relatively extensive information in the scientific literature, although a paleontologist I consulted disagreed with at least one of the conclusions in the literature. I chose to follow the paleontologist’s guidance. 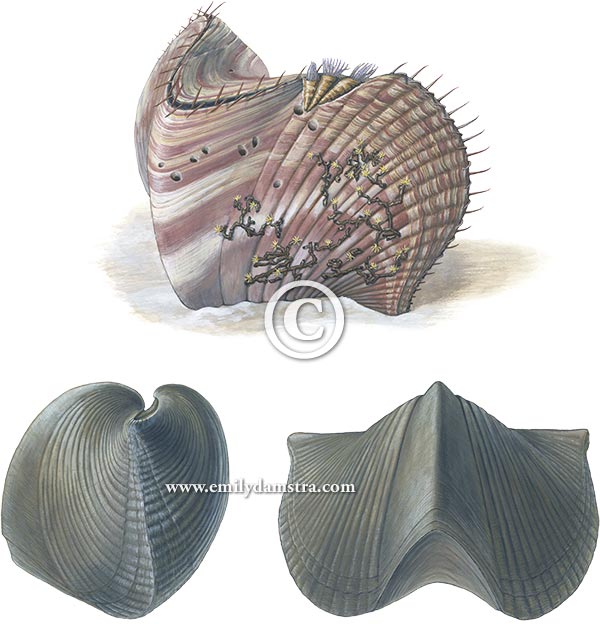 Here is the description I wrote for the FON catalog:

This species of brachiopod is from the Middle Devonian Silica Formation of the Michigan Basin. Two different views at the bottom are idealized depictions since the fossils are rarely found in such perfect condition. Most are weathered, broken, encrusted with hard debris, pyritized, or deformed in some other way. Measuring up to 2.3 in (6 cm) wide, this species is large for a brachiopod. The top view is my conception of what the animal might have looked like alive, based on a specimen that bears the predatory boreholes as well as epifauna. Near the opening at the top are three cornulitids, tube-forming invertebrates of uncertain affinity. Spread across the side of the shell is a colony of bryozoans. Although brachiopods still exist today, the order Spiriferida, to which Paraspirifer belongs, is extinct. So, there were no close relatives to serve as a model for color or position. I consulted a paleontologist who studies brachiopods in order to determine the correct position, and I used colors typical of modern marine bivalves.