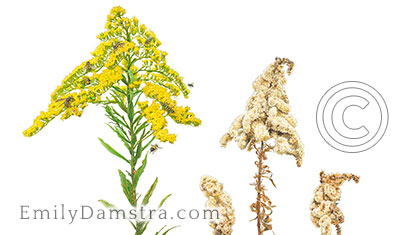 It’s late summer and the goldenrods are in bloom! These glorious bright yellow flowers are the crown jewels of summer, in my opinion. Seeing fields of them fills me with joy. To those suffering from hay fever this time of year: Please don’t mistakenly blame goldenrod for your suffering. It is the concurrently blooming ragweed that makes you sneeze. Ragweed has inconspicuous green flowers that are wind pollinated, hence the pollen in the air. Goldenrod has heavier pollen; it relies on insects for pollination. And numerous insects rely on goldenrod – so many in fact, that goldenrod may be considered a “biodiversity superhero.”

An interest in the insects and other organisms associated with goldenrod and their role in supporting other wildlife inspired me to apply for a research grant from the Access Copyright Foundation in order to study and illustrate them. That year-long project is now complete and the resulting illustration is below. 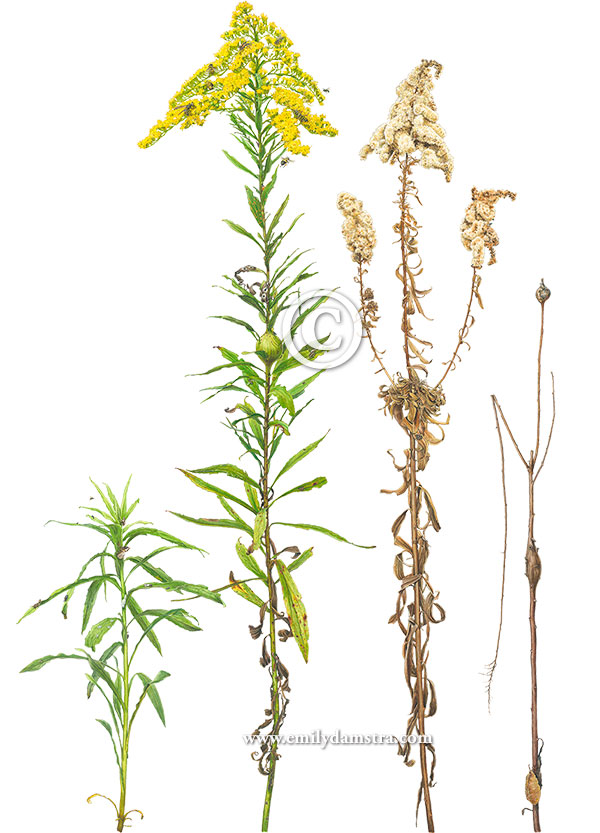 This life-size (approx. 36 in. tall) painting of Solidago altissima shows four ramets (individuals in a group of clones) – one for each season. Among the leaves, flowers, and stems are signs of 43 species of insects, three spiders, two fungi, and one snail. Nearly all are species that I personally observed during many hours of observations in the field; two are species that I did not see but that are known to depend on Late Goldenrod. There were many other species I observed or read about that I did not include because the goldenrod would have looked ridiculously overloaded.

I’ll post more information and close-up images in the weeks and months to come.

My research for that illustration piqued my interest in galls, which are abnormal growths of plant tissue caused by (in this case) insects. Seven species of flower, leaf, and stem gallers make an appearance in the illustration above. However, I wanted to delve deeper so I created a second illustration to show the surprising variety of galls that occur on stems of Solidago altissima. Galls from seven different insect species are represented here, with more than one example of some: 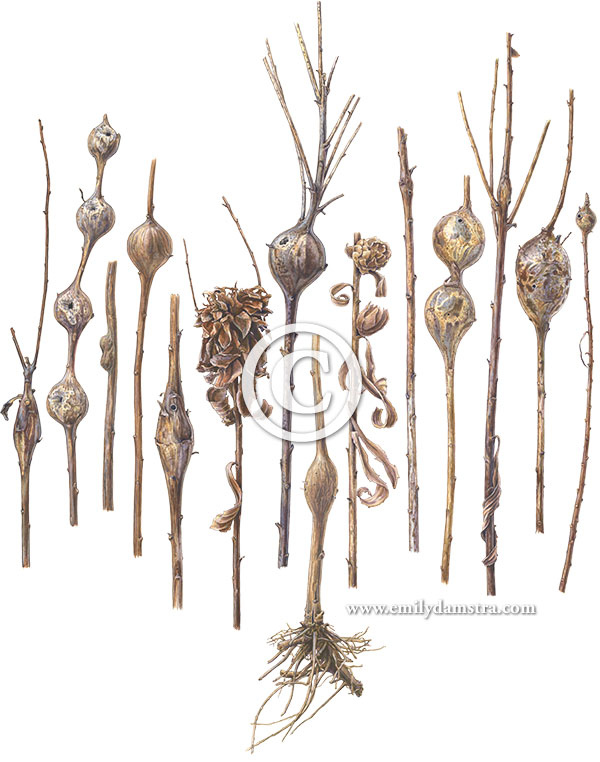 The illustrations are available as prints, with or without interpretive text. See here.