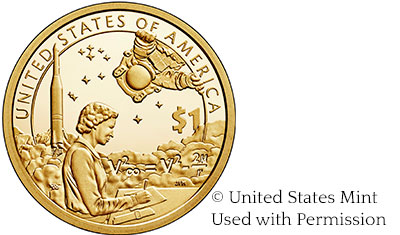 Honoring the contributions of Native Americans to the U.S. Space Program

My design includes a mathematical equation. Knowing that it was beyond my capabilities to come up with an equation dealing with orbital dynamics that I could confidently say was relevant to Ross’s work, I included in my original submission a placeholder equation. Once my design was selected, The U.S. Mint reached out to NASA engineer Willis Jenkins to provide the equation one sees on the coin.

To learn the interesting story of Mary Golda Ross and to read more about the coin, including a few of my comments on its design as well as remarks from the NASA engineer who provided the equation, see this excellent article from the Winter 2018 issue of American Indian, the magazine of Smithsonian’s National Museum of the American Indian.